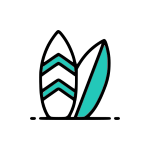 You’ll be spoilt for choice when it comes to finding surf camps in Portugal. Within easy reach of all parts of Europe, Portugal is a popular surfing destination with locals as well as international visitors. While it attracts the water-sports community all-year round, the main season runs from late winter to early spring. Come at this time of year and you can expect waves measuring anything from 2 metres up to a sizeable 15 ft. Reaching temperatures of 26 degrees/ 79 Fahrenheit in the peak of summer, this is the busiest time for tourists descending on vacation. This is also a better time for novice surfers and groms, with gentler waves ranging from 1m up to 5ft.


Karma Surf Retreat, Portugal is split between three locations: two villas with sea views near Lisbon, Cascais and Sintra, and one luxury villa on a…


Lapoint Surf Camps Alentejo location is a perfect pick for nature lovers and those looking to relax in serene surroundings. The region is known for…


Lapoint Surf Camps' Alentejo location is a perfect pick for nature lovers and those looking to relax in serene surroundings. The region is known for…


Lapoint Surf Camps put the emphasis on having fun and getting to know your fellow travellers, and their upscale hostel in Ericeira will not disappoint.


Lapoint Surf Camps put the emphasis on having fun and getting to know your fellow travelers, and their upscale hostel in Ericeira will not disappoint.


Surfriders Ericeira is a camp with a lot to offer. Situated in a village that combines the traditional with the modern (sleepy fishing village by…


If you prefer your break to be away from the tourist crowds, then CLIFF Surf Camp could be just what you’re looking for. Based in…


The Truck Surf Hotel is a luxurious hotel on wheels, giving you all the elements of a surfing holiday with the added benefit of an…

Some of the most popular locations for surf camps in Portugal include; Algarve, Alentejo, Lisbon, Ericeira, Peniche, Beira and Nazare. It’s worth noting that Ericeira, Nazare and Supertubos are all separated within an hour’s reach of each other, for those serious about finding monster waves.

Ericeira: Just north of Lisbon, benefitting from the winds of the Atlantic coast, Ericeira is widely considered to be the surf capital of the country. Named an official World Surfing Reserve by the Save the Wave coalition, it’s the only destination in Europe to receive such an honour. Acknowledged for its high quality consistent waves and breaks, the coastline is also a rich ecological area, with more than 1,000 marine species identified. As one of the best sports in Europe to catch waves, it’s no surprise that it’s also home to some major tournaments, including the coveted EDP Billabong Pro.

Nazare: Best reserved for seriously advanced surfers, you’d never think that this peaceful fishing village is also the place where pros battle against the elements and monster waves. Thanks to its underwater ‘canyon’ which is 5km deep and 230km long, it creates gigantic breaks ideal for big wave surfing. Famously, in 2013 Carlos Burle rode into history here, with one of the largest waves ever taken on!

Lisbon: If you want to pair surfing with other activities and sightseeing, Lisbon ticks all the boxes. Just a ten-minute drive from the city centre, Praia de Carcavelos always provides plenty of waves, suitable for all levels. Here locals mingle with visitors, vying for the best barrels and waves.

Peniche: The peninsular of Peniche makes an ideal spot for catching waves. There’s plenty of choice here, from the beach brakes of Supertubos (Europe’s most famous beach break), to the easier to navigate waters of Prainha. As such, it attracts some of the world’s best surfers especially come October during the Rip Curl Pro.

Praia de Faro: For those in the south, Praia de Faro is within easy reach of Faro. Owing to its gentler waves, this is the perfect place for beginners with longboard waves in its summer months. Just take note that the waters here can be chillier than up north.

Check out the listings above for some of the best surf camps in Portugal. 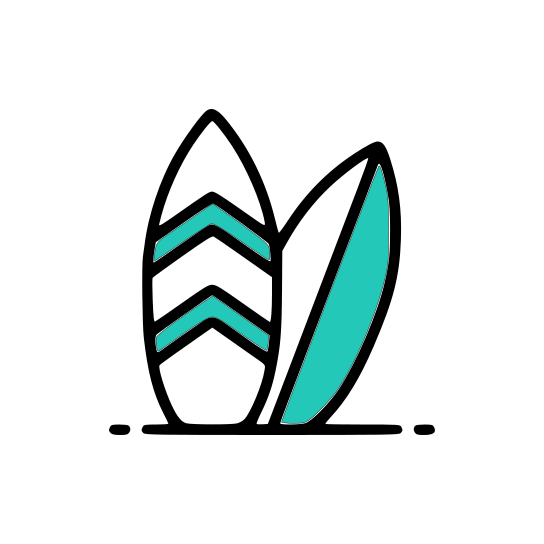